I have always believed strongly in singing the songs from one's community. Now that I live in Cambridgeshire I have been trying to find as many local songs as possible.

This has proved an interesting project because at first I only knew of one song, published in the old Penguin Book of English Folk Songs -Lucy Wan -collected by Ella Bull in Cottenham from Charlotte Dann. 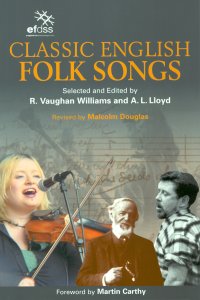 Classic English Folk Songs Published by EFDSS.
Some years ago the EFDSS commissioned a new version of the Penguin book revised by the late Malcolm Douglas. The information included in the notes was much more extensive. Thanks to his very generous help I was pointed in the right direction to find and examine all the documents associated with this song and discover many more.

The songs were in the Lucy Broadwood papers (LEB/5/62-74) held in the Vaughan Williams Memorial Library (VWML) at Cecil Sharp House. Several had already been published by Roy Palmer in his books, but there were many others in that collection of papers that were still lying in wait for someone like me to resurrect them.

All these songs are now available on the Full English website. I have recorded many of these on Fenlandia and one or two on Cold Fen, others on the recently released A Baker's Dozen and some are included in my book.

It was a very interesting experience finding out about the source singers and where they lived. I learned how to do genealogical searches and eventually even met the grand-daughter of Charlotte Dann, the original singer of Lucy Wan and many other songs. I also discovered a great deal about the original collector, Ella Bull and have visited the house in Cottenham where she once lived with her parents and four sisters.

In Summer 2006 English Dance and Song magazine ( EFDSS) published as part of its Singers, Song and Source featured one of the songs which I reconstructed from Lucy Broadwood's and Vaughan Williams' manuscripts.

The Cuckoo and the Nightingale was written down in an incomplete form by Ella Bull and sent to Lucy Broadwood. A year later Vaughan Williams visited the original source, Charlotte Dann, in Cottenham and collected the tune and the first verse. From these I was able to reconstruct the song and I have recorded it on the CD Fenlandia.

Later I discovered that Ralph Vaughan Williams had also visited Cambridgeshire in the years 1907-9 and there were manuscript copies of his waiting to be examined in the British Library. There is a microfilm of his manuscript folksong collection at the VWML in Cecil Sharp House, but the originals are much more exciting to see and touch. Vaughan Williams' handwriting was rather idiosyncratic and is very difficult to read at times. Part of the fun was deciphering what he had written, or at least making a best guess. I have been able to reconstruct several of the songs that he noted down ( without texts ) using the wonderful website of the Bodleian Library, which has an extensive section of facsimile Broadside Ballads that is available to the general public. Again, many of the songs collected in Cambridgeshire are recorded on Cold Fen, and even more on the recently released A Baker's Dozen .

I have given several talks, aided by Anahata and illustrated with a slideshow presentation on Songs from Cambridgeshire at Whitby Folk Festival in 2008,Sidmouth in 2010 and 2012, EATMT's Vaughan Williams in the East day at Walberswick in 2009, and Cambridge Folk Club. Various local history groups and village societies have commissioned talks and I am always willing to tailor talks to suit specific interest groups.

Cecil Sharp collected in the area, particularly Ely and the Union ( workhouse) and Littleport Town Girls' School , all in 1911. I have reconstructed and taught children in several schools the children's games he collected. Anahata and I have recorded some of the songs he collected from the inmates of the workhouse and residents of Ely city.